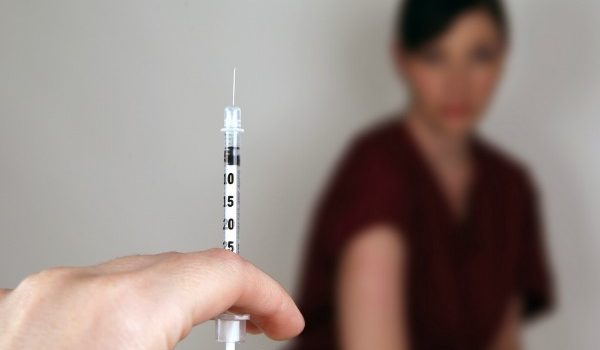 The month of May is just around the corner. You know what that means, if you’re a health-conscious individual who’s very worried about getting sick with the flu. Yes, flu season, which starts in October and ends in May, is about to end.

The flu season’s apparent end should give you a big smile on your face, right? After all, you resisted getting a flu shot the last time you were at Walmart. And you refused to get vaccinated last month when the entire family was at Target.

But don’t look now, as health officials warn that there is an expected upswing in the number of type B influenza cases this year. This just goes to show that the flu season running from October to May has basically become fictitious and that the infectious disease really never goes away.

The Centers for Disease Control and Prevention (CDC) says that sporadic flu activity will continue in the United States. It added that while most flu cases happen from October to May, there are still flu viruses that are detected during the spring and summer months.

It particularly warns senior citizens who are 65 years and older to watch their health, as they are the most susceptible to the flu virus. The same goes for children and pregnant women.

Flu has been known to hit children and senior citizens the hardest. The disease kills anywhere between 4,000 and 50,000 individuals annually in the United States.

The CDC says there are three actions that everyone should take to protect themselves against the flu:

1. Getting a Flu Vaccine

Definitely the most important step in protecting yourself against the flu would be to take a yearly flu vaccine. Although there are lots of flu viruses, an annual flu shot would give you immunity against three or four viruses that are expected to be the most common during the flu season.

A flu shot would enable your body to develop antibodies that can provide protection against common viruses that cause flu. Over the long run, it can reduce flu illnesses and the number of times you would visit your doctor. It can also prevent hospitalizations, missed work and school, and deaths related to flu.

Even if you’re not 65 years old or above, you should still get a flu shot so that you won’t get sick with the flu. An annual flu shot is particularly recommended for people who are at high risk of flu complications like pregnant women, young children, and those with chronic health problems like asthma, diabetes, and heart disease.

There are many ways to prevent the spread of the flu virus. One effective way would be to avoid getting close with sick people. And if you are the one who’s sick, you must stay away from people and keep yourself at home for at least 24 hours.

While you are sick, cover your mouth and nose with a tissue especially if you are to cough and sneeze. Then throw away the tissue right away.

Always wash your hands with soap and water. If there’s no soap or water around you, an alcohol-based hand gel may suffice. Don’t touch your eyes, mouth, and noise as this is one way to spread the germs that causes the sickness.

Seek medical attention if you’ve been sick for several days. Your doctor will likely prescribe antiviral drugs that can make the illness milder, and cut down the amount of time that you would be sick. These prescription drugs would also prevent serious complications of flu.

According to studies, the earlier you take an antiviral drug, the faster you’ll recover from flu. Ideally, antiviral drugs are to be taken 2 days after the first onset of flu symptoms. These include fever, cough, runny nose, body aches, chills, headache, fatigue, and cold. Other symptoms of flu are diarrhea and vomiting. Still, taking these medications at a later stage would still be helpful particularly if you have a high-risk health condition.

The reality is that gone are the days when the flu season only happens from the months of October through May. There will always be a risk that you’ll get infected with the flu virus in the spring and summer months, so you should really get a flu shot to keep yourself and your loved ones protected. Aside from getting a flu shot, following preventive measures to stop the spread of the flu virus and taking antiviral drugs are some of the ways to fight off the disease.