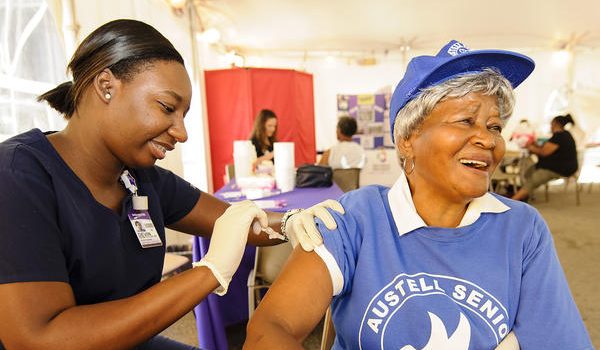 Health experts in the public and private sectors work together in the research and development of flu vaccines for the current and coming flu seasons. But because flu viruses are constantly changing – genetic mutations that epidemiologists call drift – and the flu vaccines take months to make before roll-out to healthcare practitioners, guesswork with the annual flu vaccines will happen due to the time lag.

Scientists are then in the research and development stage for a universal flu vaccine, which will ease the burden on the healthcare system in relation to the yearly release of the current flu season’s recommended vaccines. The universal flu vaccine will work against multiple strains across multiple years although an annual vaccination will likely still be required for high rates of effectiveness.

But is a universal flu vaccine possible? With two recent studies, scientists appear to be on the right path albeit the step toward its realization may still be a small one.

In the Science and Nature Medicine journal, independent teams reported their studies on hemagglutinin, a lollipop-shaped protein that covers influenza viruses and that the viruses use in sneaking into cells. The viral protein can be used in teaching immune systems – in the studies, monkeys, mice and ferrets were used – to fight entire groups of flu viruses instead of a just a single flu strain. According to Gary Nabel, the leader of one of these studies and the former head of the National Institutes of Health’s Vaccine Research Center, this is a small yet significant step in the creation of a universal flu vaccine.

The human body’s immune system also produces antibodies, which attach to and neutralize the head of hemagglutinin; the head itself largely escapes the immune system’s detection through constant mutation. These unusual antibodies bind to the hemagglutinin’s stem in several different flu strains, a Eureka! discovery that the researchers of the second study made; the second study was conducted by the Janssen Prevention Center with Ian Wilson as co-author.

The researchers concluded that with these unusual antibodies, a universal flu vaccine can be developed. Said vaccine will not only provide protection against seasonal flu across multiple years but also perhaps against other flu viruses, such as new strains in humans as well as animal strains (e.g., bird flu and swine flu).

With these discoveries, the two independent teams set out to develop a vaccine that can elicit these unusual antibodies. But therein lies the dilemma: The immune system will largely ignore hemagglutinin’s stem for as long as its head is present, which means that it will not produce broadly neutralizing antibodies.

Or as Nabel makes it easier for laymen to understand: Think of a hemagglutinin-coated flu virus as a small planet with abundant tree cover with the most visible parts being the leaves of the trees (i.e., the heads of hemagglutinin). In order to see the trunk from an overhead view, the leaves must be chopped off but herein lies the issue – when the hemagglutinin’s head is removed, the entire viral protein falls apart such that the stem itself becomes unrecognizable to the unusual antibodies.

The two independent teams adopted different approaches in solving the issue. The National Institutes of Health team developed self-assembling, hemagglutinin-stem nanoparticles, which are stripped down versions of the viral protein held together with ferritin. The Janssen Prevention Center team replaced and added amino acids to stabilize the headless hemagglutinin.

While neither group has yet to truly invent a universal flu vaccine – bear in mind that there are literally hundreds of flu strains classified into three of the biggest troublemakers, namely, A, B and C – their findings are already making waves in the scientific community.

For now, the seasonal flu vaccine will suffice for protection. You can compare prices of the flu shots and sprays at CVS, Wal-mart and Target, among others.